Pocket Money: Why, When, How much?

When it comes to pocket money, there’s lots of advice out there.

When a parent says pocket money, we assume they’re thinking about a chores chart or the numerous hand outs they’re passing over to their kids. We believe pocket money is more than that and should be structured in a way that is educational for kids and practical to introduce them to basic money skills to prepare them for the future.

We’ve spoken to psychologists, money experts, parents and included our own knowledge from building Spriggy. We’ve seen how families use our pocket money app and thought the best place to start our guide would be with three simple questions: 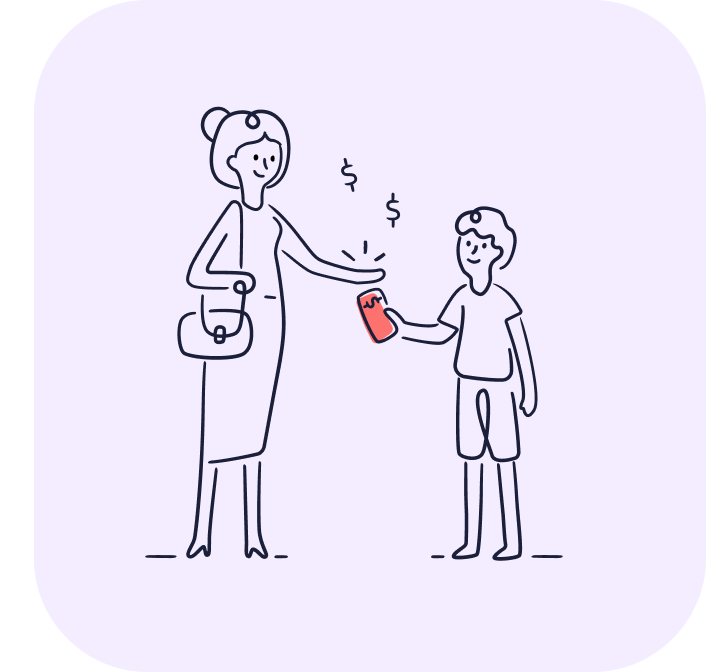 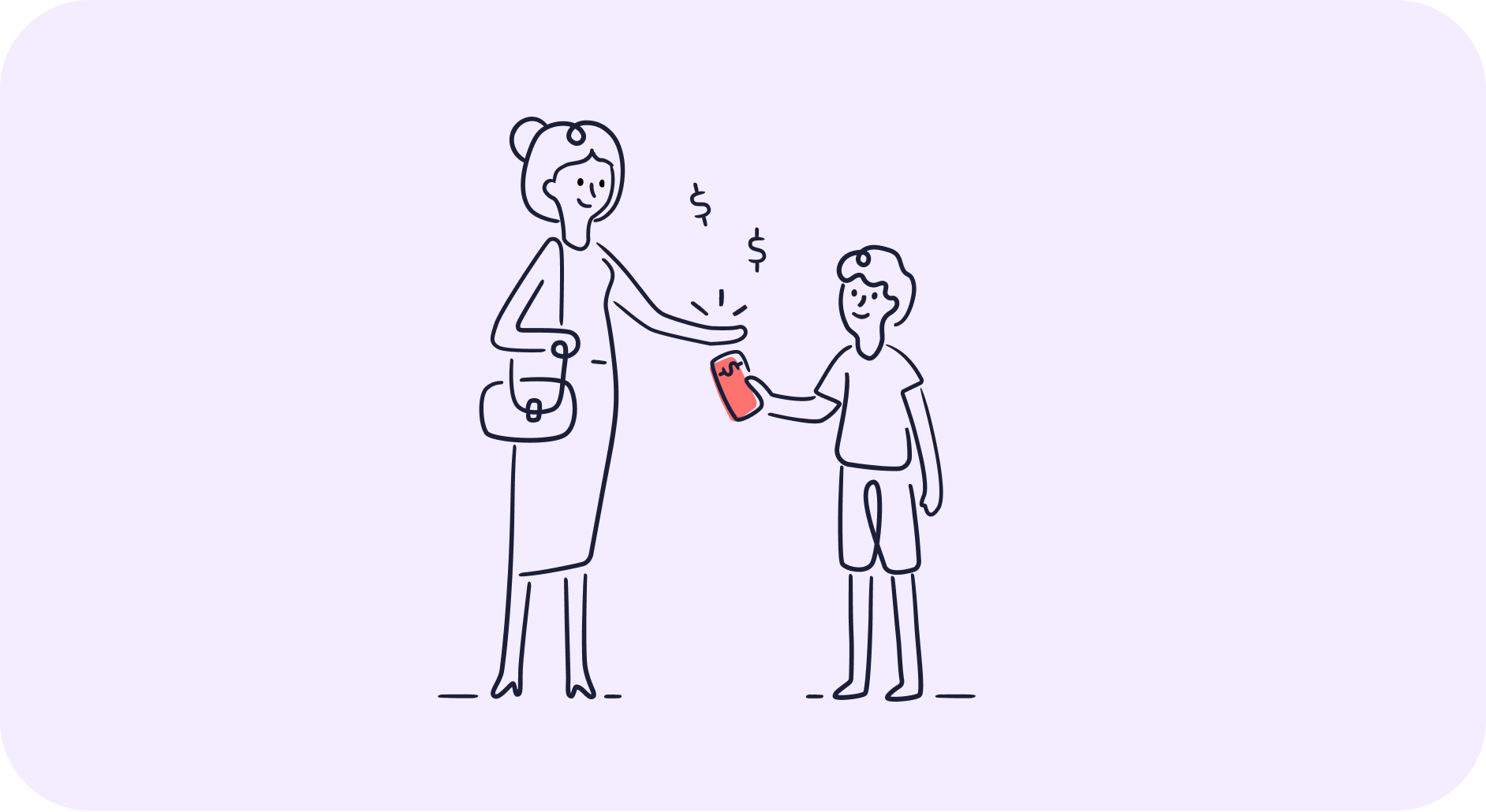 So why should we give our kids pocket money?

In short - to build independent, smart and resilient kids who are ready to tackle the world.

‍
In Australia our average credit card debt is $3,258 per card. Our average household debt is $257,000. If you’ve ever been in debt, you’ll understand why we want to do anything we can to prevent our kids from having to deal with it. And we can!

Pocket money is a tool for kids to learn how to manage their money in the future. Giving your kids some financial independence at an early age will teach them important money skills that they’ll use for the rest of their lives.

‍
75% of Australian’s think schools aren’t doing enough to teach essential financial skills, and 40% of us wish we’d been taught more about finance at school. Like it or not, our kids learn important life skills like money management from us. So it’s up to us as parents to make sure they enter the ‘real world’ with a good understanding of what makes it go round.

“Spriggy gives them the ability to have a savings goal, which is a life skill they will need for the future.”
Jodie, Mother of two.

‍
Kids learn by doing, they need tools to build their skills. We’ve spoken to Spriggy families who’ve noticed that the moment their kids really start to learn about money is when they’re given independence. When they get their own money, through weekly or fortnightly pocket money payments, that’s when the penny drops! They learn that money doesn’t grow on trees and Mum’s plastic card doesn’t have an infinite amount of money on it. They build on their financial skills by making their own spending decisions, and realise things like saving now means rewards in the future. 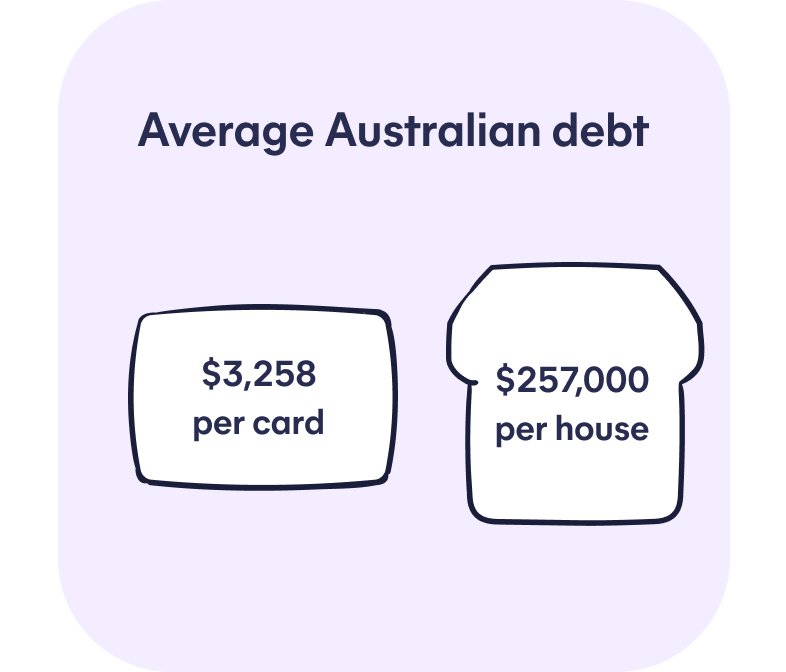 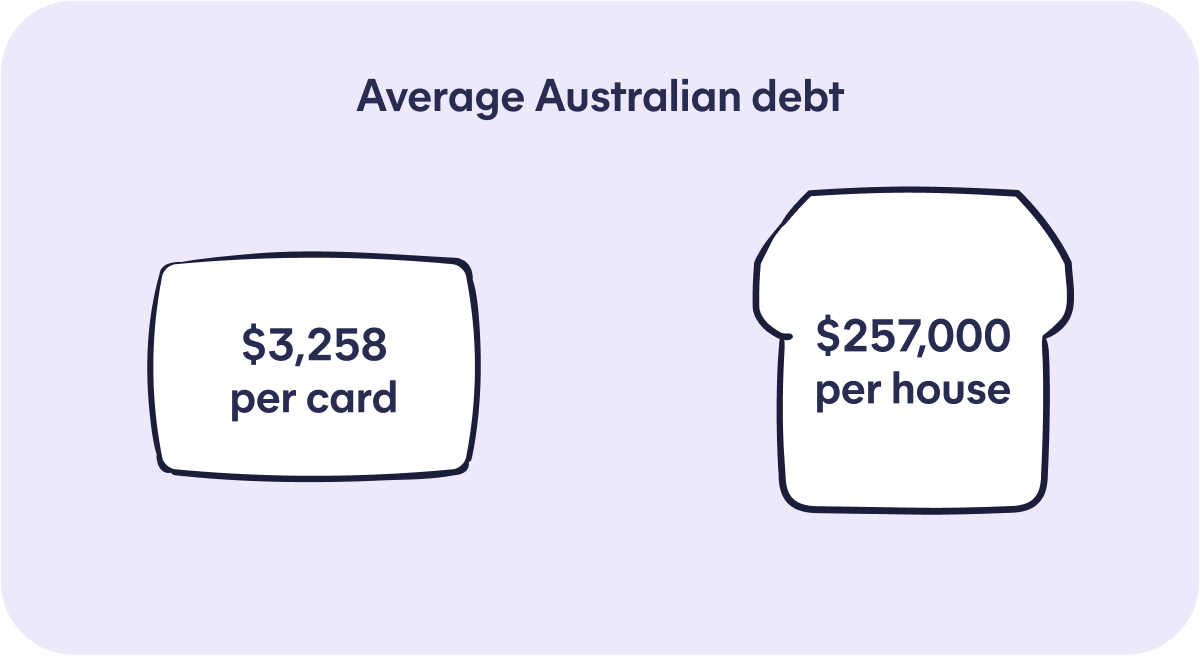 Now we’ve worked out that giving kids pocket money is a good idea, when should we start?

Well, really, it’s up to you! You can start as early as you like and use games to help them understand the basics of earning, spending and saving before giving them real money.

Most parents start giving their kids pocket money when they’re 5 or 6. We think that’s a good place to start. But if you’re still unsure, or think your kids might be ready for pocket money earlier - here are some things to consider:

Do they have older siblings?

If they’ve been exposed to the concept of pocket money around the house they might have grasped the basics and be ready for it earlier.

Do they know we need money to buy things?

You can test this concept out when you’re doing a weekly shop with them, when you get to the checkout ask if they know how we get food to the car without the security guards running after us! (a good lesson on why not to steal here too!)

Do they understand the concept of saving to buy more expensive things?

You can test this by playing some savings games with them (recommend game) It’s fun and helps start them out on those all-important financial literacy skills!

Do they get that if they spend all of their money at once, there won’t be any more until next payday?

Structure their pocket money payments so they understand how much and how often they can spend. If they blow it all at once, it’s gone! Let them make these mistakes too, it’s a valuable lesson.

Do they know that money doesn’t grow on trees?!

Of course we all wish it did. And kids tend to think that money just miraculously appears particularly in today’s cashless world. But it’s important they understand that we don’t have an endless supply in our bank accounts (even though we really wish we did!). Ask them simple questions about money and if they’re not too sure, here’s an opportunity for you to teach them.

Kids mature at different ages, so think less about their age and more about the stage they’re at. But really, the earlier the better. As soon as your child understands the basic concepts about money they should be ready to start looking after a little bit of their own!

“It’s never too late to start, but there’s definitely a good reason to start early! I was playing with Barbie’s and had no idea about value exchange at 7 years old. My son, on the other hand, was selling loom bands and making a tidy profit at 7 years old!” Lisa Wilson, Financial Expert and Mum.

When you decide to start giving them pocket money it’s important to have a structure. So they understand how much they’re getting and when they’ll get it. Consistency is key to help them set savings goals and budgets so they can understand how money works in the real world and make their money last until their next ‘paycheck’. 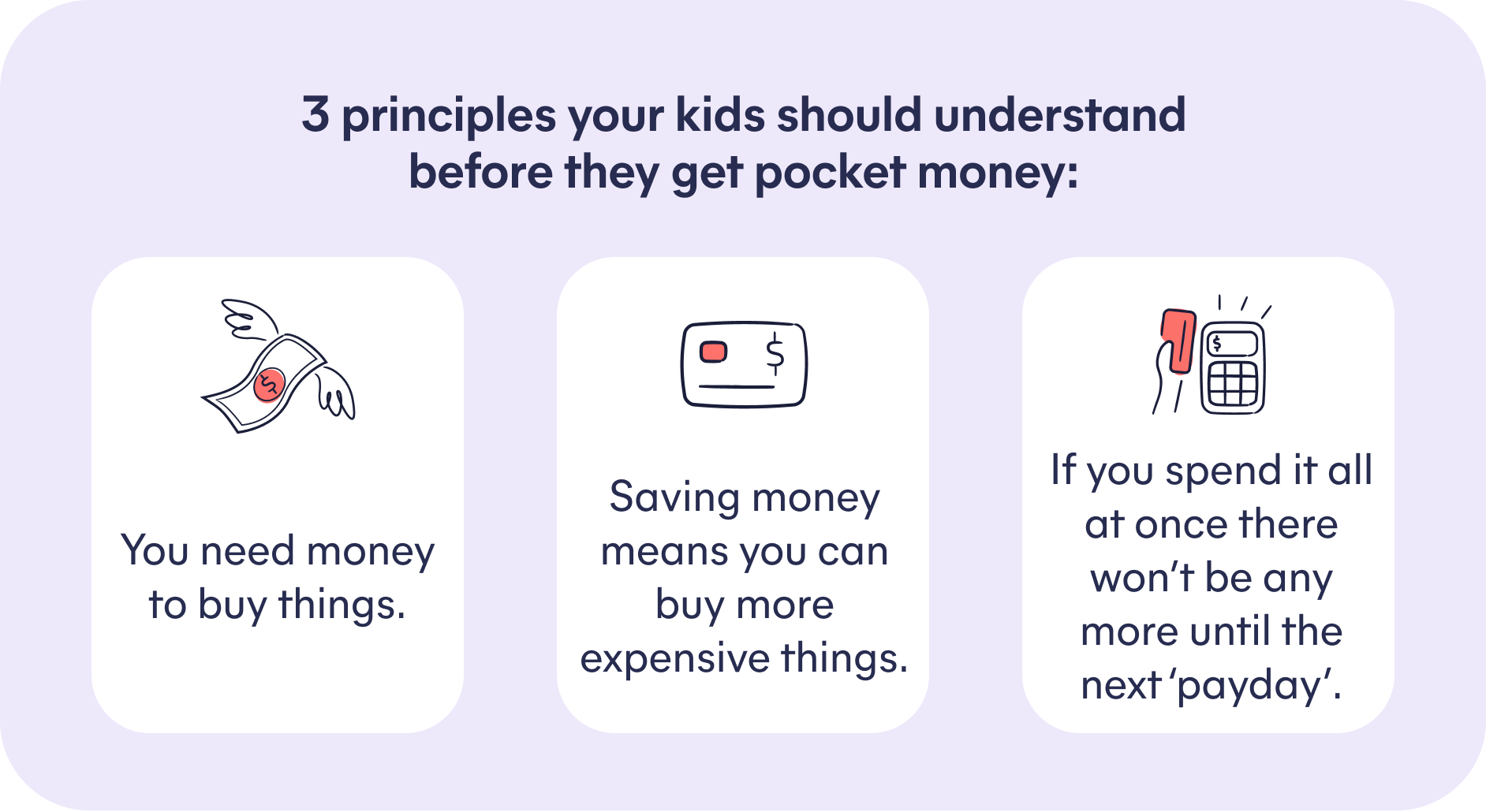 And now for the how! Wondering how much money to give them?

Choose the same day each week to give them their pocket money so they get into a good routine, this will help them budget. Maybe as a nice treat after school on Friday? Or at a mealtime over the weekend to spark a conversation about money, giving you the opportunity to teach them a new financial term or two each week!

What’s great about this method is that it makes their birthdays extra special too. Not only are they filled with balloons, cake and presents, but they also get a pay rise - and that makes for smiles all round!

It’s completely up to you though, and if you have lots of kids, then ‘payday’ could get quite expensive! So don’t feel like you have to follow our advice, make sure you don’t put a dent in your own budget.

As kids get older we suggest giving them more responsibility when it comes to money. You could increase their pocket money to $50/month but they have to pay for their phone bill or school lunches. As parents, we ultimately pay for everything so handing over more of those decisions to kids as they get older is a valuable learning experience. Paying kids monthly or fortnightly is a great way to test their budgeting skills to get them ready for the real world!

A little is enough to teach them the basics of good money habits, and that’s the goal of pocket money after all! Now you can teach them where money comes from, and let them earn a little more by helping you around the house. But that’s a lesson for another day! 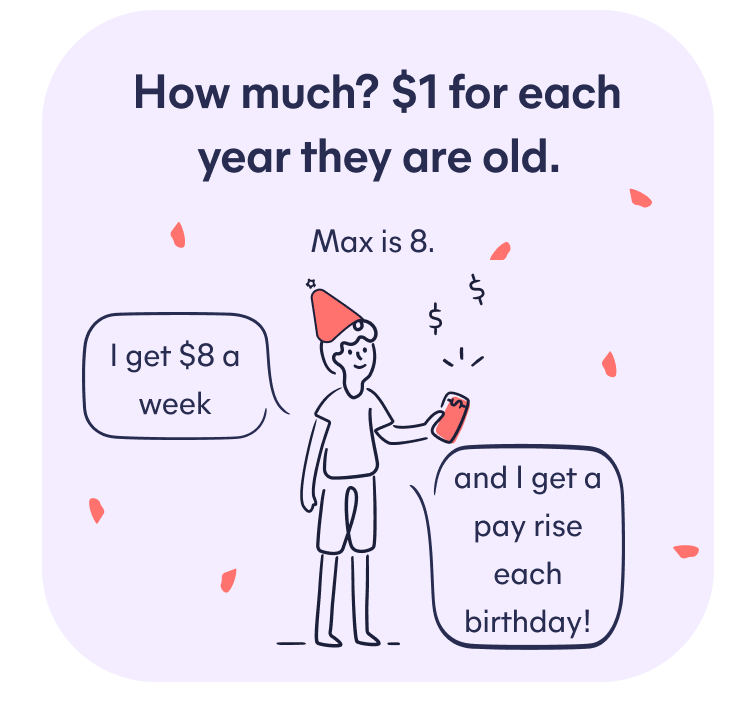 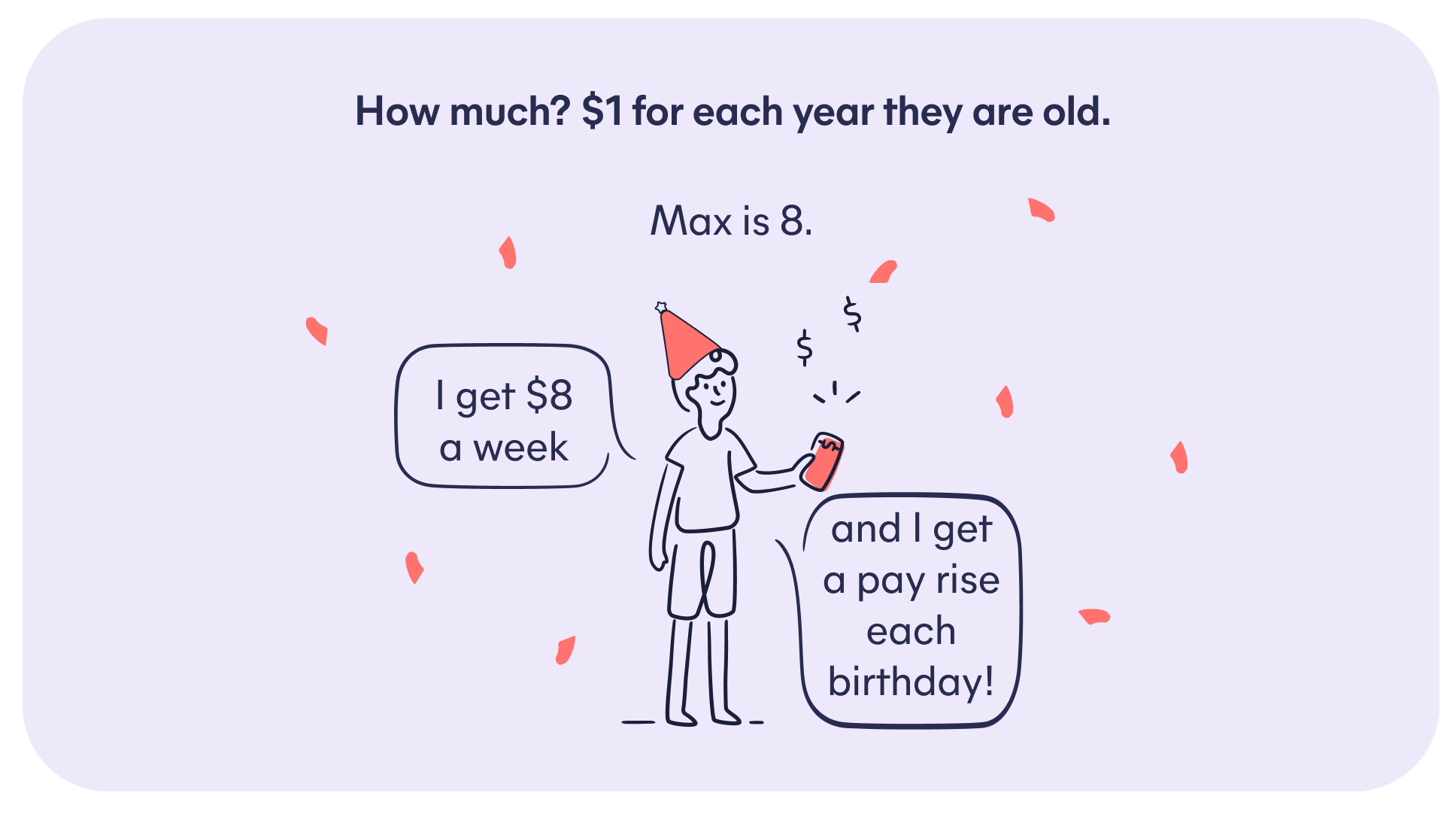 Teach your kids how to earn, save and spend responsibly with their own Spriggy account!

“Love the scheduled top ups as it means I can set and forget.” Jane, Mother of two 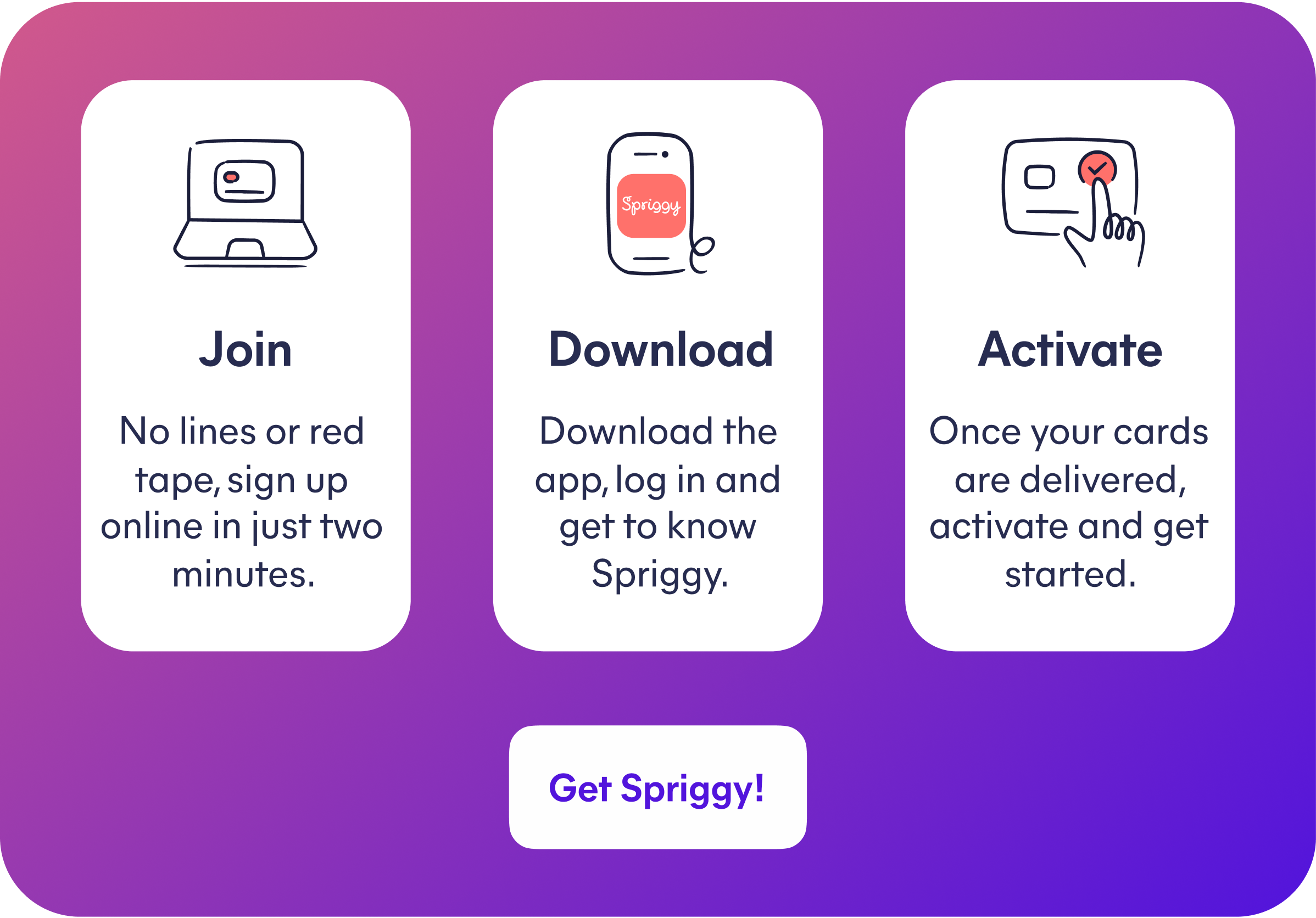 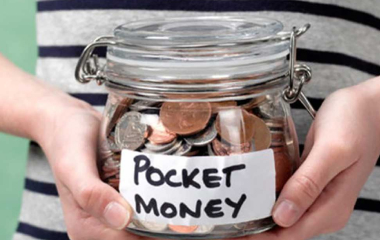 Follow these simple steps to give your kids the tools they need to start learning about money. 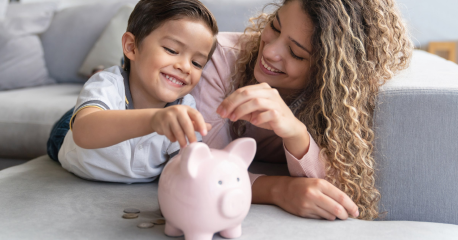 Investing For Your Kid’s Future: The What, Why, When & How

Everything you need to know about investing for your little ones, and why it pays to start early.
Back to blog

The first month is on us, then just $30 per child per year. 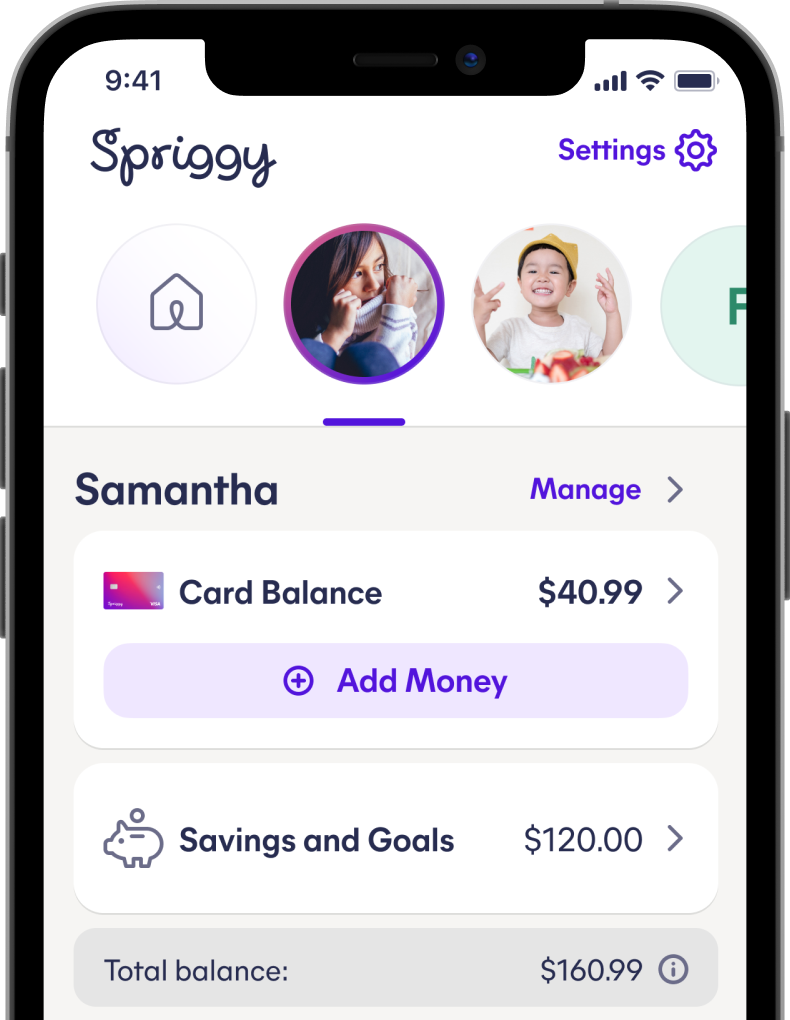 Visa and the Visa brand mark are registered trademarks of Visa Worldwide Pte Limited. Rivva Pty Ltd, AFSL 513762 has been appointed as a third party agent of Indue Ltd (ABN 97 087 822 464), AFSL 320204 based in Brisbane, Australia, the issuer of the Spriggy Prepaid Card and Parent Wallet. Consider the Product Disclosure Statement containing the terms and conditions and the Target Market Determination to ensure the product is right for you. Any advice provided is general in nature and does not take into consideration your objectives or financial situation. Before acting on any advice consider its appropriateness. See full terms.